At LIONS Self Defence & Leadership Martial Arts Leicester because we teach kids and teens I often use metaphors and stories to explain concepts. Most of the time they are very modern and relate to those things that interest kids most – movies, games, superheroes etc etc.. but sometimes it is important to revisit the traditional.

I want to discuss with you, 3 things we can learn from the Bamboo tree…………… Sensei Bamboo if you will! 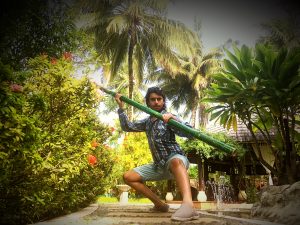 There is an old story about chinese bamboo which has been told countless times. Do you know it?

When a farmer plants a bamboo seed deep in the ground he hopes that one day it will be a tall tree. The farmer waters this seed daily and fertilises the ground. His belief is steadfast and his actions consistent. Yet in the first year he sees nothing, he continues and in the second year he sees no visible results. It is difficult to continue but he has faith so he continues his nurturing for year three, another year passes and then another. In year 5 he finally sees a result. A small bamboo shoot breaks through the ground. Then it happens… within 5 weeks that bamboo tree grows 80 feet tall (around 25 meters!). That is the same size as a competition swimming pool!

There are some key lessons we can learn from this story. In our ‘on demand’ world where food is available by drive through, movies on request, games downloaded in an instant it is easy to become accustomed to fast ‘results’.

However, with martial arts there are no quick fixes. Learning any skill takes time and dedication. To understand this we can reflect on an excellent poem by Henry Wadsworth Longfellow that is as true today as it was when it was written more than a 100 years ago:

“The heights by great men reached and kept
Were not attained by sudden flight,
But they, while their companions slept,
Toiled ever upward through the night.”

Ladachovski wrote that as society becomes more ‘instant’ there will be a generation of quitters. It is my mission to empower as many children as possible so that when that generation of quitters are ‘sleeping’ our LIONS will be toiling upward through the night. After all, the lions share (for want of a better term) of happiness and fulfilment is given to those who strive for it. What do you think?

At LIONS martial arts we understand that kids like to see their progress visually. so we break large goals like the attainment of black belt into smaller goals like the coloured belts, and then further into tags and milestones. We do the same on a smaller scale for the achievement of skills like the splits or number of push ups etc.

If kids can learn the patience it takes to refine their skills and practices from martial arts, they can apply it to everything. Lets say they have a goal to become a neurosurgeon – it certainly isn’t something they can achieve instantly. But the drive and dedication learned from martial arts can empower them to achieve those later goals.

Our LIONS parents are literally AWESOME! They stay in class and watch their kids and during water breaks I can hear parents telling their kids how well they did AND how they can keep improving by working harder! That is EXCELLENT.

Because of our disguised repetition through high energy drills, sometimes kids don’t even realise how much they have improved until I point it out. From simple things like alignment of technique to balance or number of moves learned.

One boy in my 5-8 year old class won an award from his football club because he is the most disciplined in his squad; when he first came to my class he had less than ZERO focus. But SMALL STEPS in the right direction and learning what discipline meant at LIONS helped him. Another girl in the same age group had tried dance classes but cried in each lesson because she felt too shy to participate. Her parents bought her to my class and we also had the same. I continued to work with her and build her confidence and eventually after a few months she even volunteered to be a leader at the front of class counting for the other students (public speaking). A few weeks ago I went to see her in a dance show and she performed on stage in front of 700 people. SMALL STEPS. One girl in my 9+ class told me she was asked to run a warm up in her dance class – she used our LIONS warm up and the other students couldn’t keep up. 11 weeks ago when I introduced a move called ‘super-ninja starjumps’ she herself could only do about 4, last lesson she did 15! SMALL STEPS. There are many MANY students at LIONS I can talk about who have improved with their focus, teamwork, family and social skills, confidence etc as a result of them, and their parents, taking small consistent steps in the right direction. I am very proud of them all!

If at first you don’t succeed, don’t quit… work harder!

In the movie Game of Death Bruce Lee famously talked about flexibility to adapt using the green bamboo as a metaphor.

The bamboo teaches us to be adaptable to external situations while still maintaining firm roots and groundedness. To be able to bend with the wind or go with the flow is an important life skill.

3) LOOKS CAN BE DECEIVING

The bamboo may look soft, bendy and fragile yet it is powerful and strong! This teaches us not to judge a book by its cover.